I have been having a clear out. Sorting through drawers, boxes, wardrobes, cupboards, attics, and under beds. I am on a mission to cleanse and purge, making the most of a bit of down time before holidays and a new job in September. Such an unbelievable amount of ‘stuff’ we have acquired over the years as a family of four (and I guiltily admit to liking my ‘stuff’). It’s quite painful to get rid of things, I’m finding, and painful also just to come across things sometimes… when you sort and sift through the past, along with the dust and the stray objects long since forgotten and given up as lost – a treasured toy; a piece of misplaced jewellery; that key that fits that window you could never open or that vital lead that connects to something equally vital though you can’t remember what now… that tape measure you could never manage to locate when you needed it and replaced three times over; and such a miscellany of odd screws, buttons, paperclips, pens (where did they come from? What do I do with them? Surely it’s wrong to just throw away perfectly usable things?) – you stir up memories. Emotions. Lain dormant for a long while. Some things – especially old photographs I’m finding – I cannot even bring myself to sort through yet. I can understand how people become hoarders and prefer to live with their things all around them. It’s comforting to know that they are there, inhabiting their space like mute companions, without having to deal with them directly. Let them be. Let them gather dust and great significance in their rightfully-claimed-patch-in-the-world where they will languish until you are gone, and the fraught, messy job of ‘dealing with the stuff’ can be left to others.

But deal with our stuff I must, because our generously sized house is fast filling up with things. Books, it seems, are a particular weakness. Some things, though, it is joyful to come across. Some things make me smile. Like this little note from fellow photographer and blogger Cath Rennie of Settle and Chase. Occasionally, other bloggers send me things in the mail, and this was one such thing – small but delightful – which I have kept. Words to treasure. And the little photograph of the orchid she sent with it is pegged to my inspiration board above my desk, vying for attention between a scrap of original wallpaper from our study found by a carpenter building some bookshelves (a delightful discovery), an old postcard of the Eiffel Tower (from about the same period – late Victorian 1880s – discovered in a French market), and a polaroid-style instagram photo of some grasses blowing in the breeze. I think it was taken in Mexico about three years ago. I like to keep some of these little photographs dotted about the place and I often use them as thank you notes. I look at Cath’s little orchid often as I look at all of the things I peg up there, but I thought I had lost the note she sent with it and was happy to rediscover it. 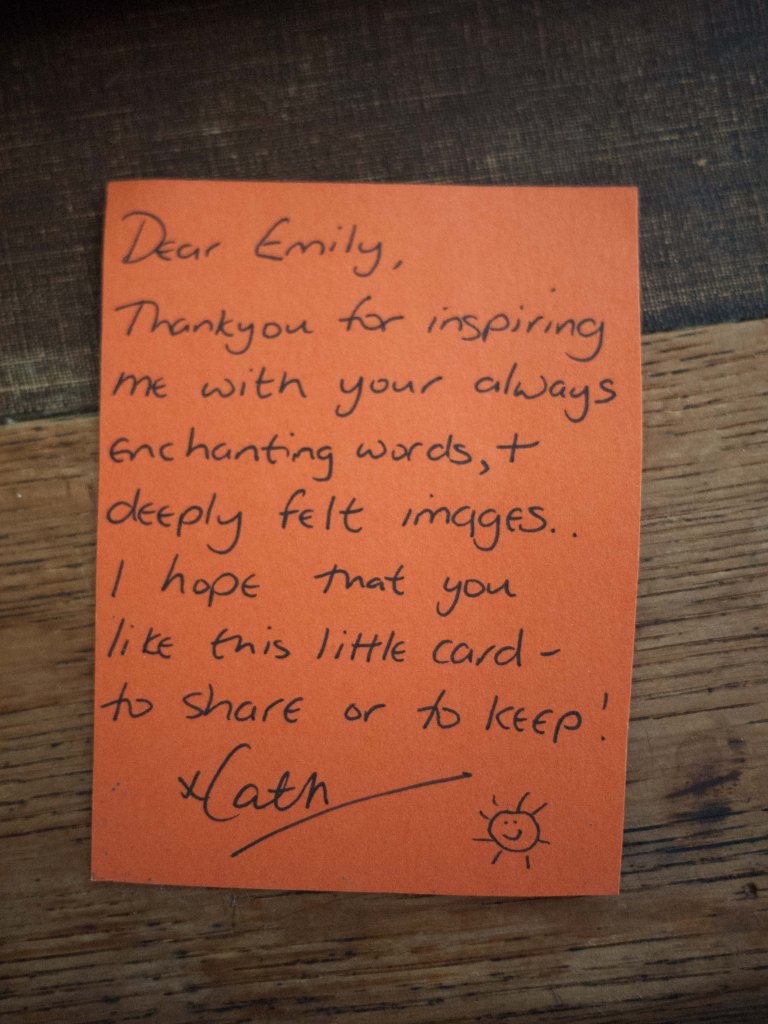 11 Comments on “a fragment”