tell me a story 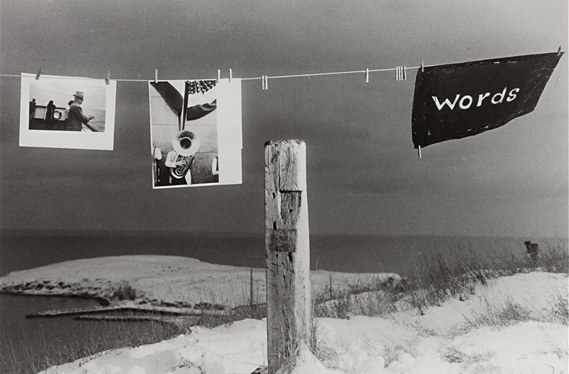 Stories are necessary, enchanting, evocative things; but they can also be the means by which our dreams are traduced or defused, defiled or filed away. We learn to read sideways. We learn to read by the light of secret planets and signs.

Excerpt taken from From one state to the next by Ian Penman (included in the forward to Robert Frank, Storylines)

One of the things I love most about blogging is the opportunity it provides to make connections with so many other creative and inspiring people. I remember vividly the excitement of starting this blog four years ago; gaining followers, having people comment on my pictures for the first time, discovering other like-minded bloggers. I posted a series of pictures my husband and I had taken in a house in Italy, and a fellow blogger (writer) asked if he could pen some words to them as a writing prompt, and so an artistic collaboration evolved with Nathan from The Whole Hurly Burly. I was curious to see what he would come up with, and it was indeed a fascinating process seeing your own pictures take on new meaning through somebody else’s eyes. It was good, from my part, to know that a collection of pictures which I had put together had the possibility of narrative, and that they could not only tell a story, but provoke an emotional response, and one which had resonance.

Sometime later I found the courage to instigate another artistic collaboration on a larger scale when I imagined the journey of a photograph project. A humble forgotten photograph has taken on new life, weaving words, stories and memories in its flight around the globe.

I remember the exact moment when I realised that exploring narrative in photography was something not only important but necessary, and that combining words with images was what I wanted to aspire to do in my own photography. It was when I went to see the Storylines exhibition at the Tate Modern in 2004.

Frank is a storyteller; he attempts to convey narrative and sequence in his work employing not just photography but text – sometimes just single words and images, sometimes scratching the words into the surface of the negative – as well as video and film to create a dialogue (although more recently he has focussed exclusively on still photography). His later more experimental autobiographical work (and especially his polaroids and Mabou series from his home in Nova Scotia) for me is extremely powerful; saturated with emotion and complex layers of meaning. Photographs are grouped together haphazardly, peppered with random words sometimes scratched angrily or smudged. Fragments of writing, like diary entries, sometimes typed or handwritten are cut and pasted onto sets of images, creating crude collages which further add to an impression of fear, confusion, but also of profound sadness. There is so much to look at and explore in this work which reads like an expulsion, an exorcism even, of inner torment.

Although his later work never received the critical acclaim of the earlier projects such as The Americans (perhaps because it is less accessible?) I found it very moving. It speaks (to me) and tells the story of a deeply disturbed state of mind. Of a man who is broken. 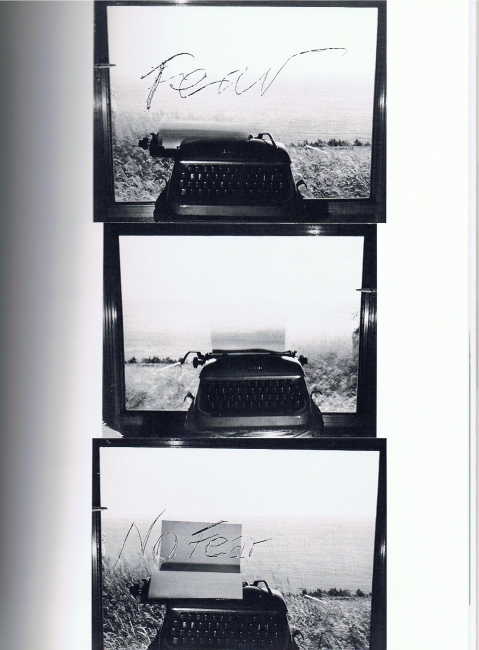 © Robert Frank, Mabou 1987 – image reproduced in Fashion for Writers .
I often write little short stories, or poems to go along with my images. I do it because it’s something I enjoy, often as much as making the picture itself, and I think that words have a tremendous power to bring life and meaning to a picture. This picture ‘the feathers’ is one I made a couple of years ago and recently re-worked into this final image. It features a fine pair of pheasant feathers, and is inspired by a sweet little story, when my husband bought home a surprise one snowy winter night. I posted this a while ago on here (some of you may remember). I have edited it very slightly since then. 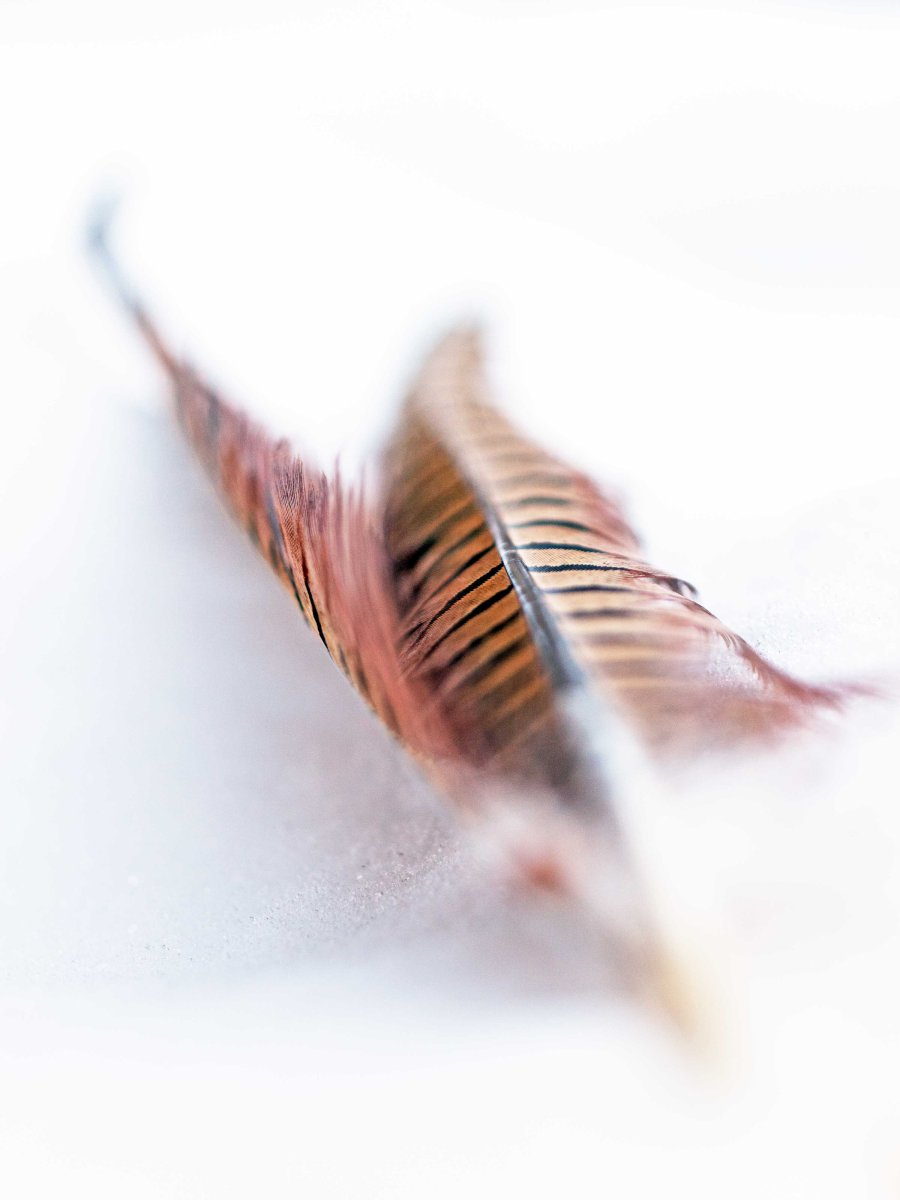 ‘the feathers’, 2014
The Feathers
We heard the slam of the car door, then the familiar thud of his footsteps. The door opened. It was dark and cold out, and we could see he had something bulky and unfamiliar hanging from his back. Smiling in the shadows, he dangled his prize in front of our faces. I screamed.
Two dead pheasants.
The boy was amused; the girl less so.
He hung them in the garden shed in the dense, bleak night, and after the snow had begun to fall, and a snowman had been made [two hazelnuts for eyes; a jaunty snow hat, and an elephant for a companion], he began the long, diligent labour of preparing the birds with his strong, adept hands. The snow had created a perfect crisp white work surface for the task. He plucked the feathers (taking care to put aside the two longest, most elegant), then they were gutted and washed, cleaned, and finally – pink, bald and dimpled – ready for the pot.
The girl looked on with growing disgust.
“I’m NOT eating that!” she wailed.
But she kept on watching.
When the day came to cook them she quietly observed him from a distance as he worked. Slouched against the kitchen door frame.
“Want to cook with dada?”
“Okaaaay” she relented (she never could resist).
Later, I went outside. The sky was blank. Bleached white, as if it had been erased. It felt as though I could reach up and touch the clouds, weighty with snow. I found the stray feathers from the birds cocooned in their white blanket, abandoned where they had been strewn a few days before. They were graceful with strong supple whiskers. They were bold and colourful in rich auburn shades and a fine tiger stripe print. But they were also wispy little locks of silky-soft fluffy down-like bristles. As I photographed them the snow started to fall, slowly and tentatively, executing perfect pirouettes downwards towards the waiting ground.
The gleaming flakes clung to the feathers and gave them new form. It seemed like a fitting tribute to those birds to capture them there in that moment. In the snowfall. All that remained of their plump weight. Of the organs and the blood. The flesh.
And soon the snow will melt as the air starts to thaw. The feathers will turn to sludge and join the mud of the earth. Their proud, shiny plumes; soft tufty barbs and fine opaque quills will spoil and fade to nothing, or be carried away to nowhere on the gust of the next windy day.
But there is still something.
There are still two:
One for a boy, one for a girl.
Strong and tall and vibrant.
Remnants.
From the earth, which fed us.
A simple, hearty supper shared amongst friends.
And then, to the earth it returned.
[And the girl?
Well, she ate, and enjoyed her meal.]

This blog post is a re-working of two previous blog posts; words and pictures, and the feathers.

The feathers is also available to purchase as a limited edition print from my artfinder shop.